What is a vibration?

Vibration is simply defined as the variation of an object about a fixed position. To properly define and quantify the physical characteristics of vibration, however, is much more complex – account must be taken of the direction, frequency and magnitude of vibration. Then, what properties should be measured? Is it appropriate to measure the displacement of the vibrating object as a measure of its amplitude, or should we instead measure velocity or acceleration? What are the conventions for measuring direction, and is it really important?

Generally, when measuring vibration as a purely mechanical occurrence, we are concerned with its frequency and the magnitude of its acceleration when undergoing harmonic oscillation about an equilibrium position. We choose acceleration as the measurement of amplitude as this is the easiest quantity to measure and, by application of basic calculus, we can infer the velocity and displacement of the vibration. The simplest analogy for a vibration example is that of a mass suspended on the end of a spring:

This is an example of simple harmonic motion, a sin curve with the equation; y=sin x. It is easy to see the displacement as a measure of amplitude; here, it is simply ‘1’. This is the factor by which the sin curve is multiplied and as such it’s minimum and maximum will be equal to 1 and -1 respectively. We chose to measure acceleration rather than velocity or displacement, as it is easier to measure and often more accurate due to the nature of the sensors used. The frequency of vibration is the number of times the equilibrium point is passed in a given period of time. Each period of vibration covers the motion from equilibrium (or some other marker point) to maximum displacement to minimum displacement, back to the equilibrium or marker point again.

This previous model neglects the important contribution of damping to almost all vibrating systems. Damping can be applied through the addition of constraining layers of material, or from devices like dashpots and mass-tuned-dampers, and serves to dissipate energy from the vibration. Without damping, a vibrating system would just oscillate between two points without stopping. In reality, the material in the vibrating system will provide some damping, as will the air surrounding the system and so this eternally oscillating system could never really occur. 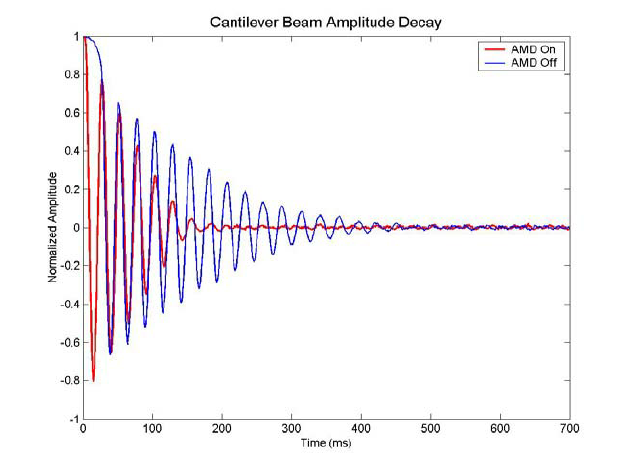 Some typical examples of vibrating systems include:

What problems can vibration cause?

People are subjected to vibration every day, and it is often simply not thought about. When a mobile phone is put into silent mode, its vibration alerts us to messages; when travelling in a car we use the vibration of the car as a form of feedback to monitor its performance; Every sound we hear is the result of something somewhere vibrating – and the sound itself is caused by the air making our eardrums vibrate! However, aside from these useful applications, vibration can be the cause of some serious problems with regards to health, structural damage and stability, and noise problems.